Geraldine at La Tarumba invited us to visit their circus school and to a night in the Big Top. La Tarumba is a circus, theatre and music company from Peru. The school is based in the centre of Lima, and runs courses and workshops for people using circus to build their confidence and self-esteem. It operates as a social enterprise, funding it´s work with children and young people through ticket sales at the Big Top.

The enterprise was established back in 1984, at the time of a great economic crisis in Peru. It was founded by 3 young actors who performed as clowns on the streets of Lima. Their work was often political in nature, they wrote stories and performances that spoke about the social and political context of Peru at the time. 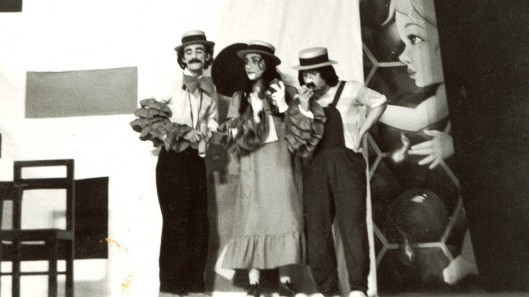 They wrote a performance called ¡Cállate Domitila! which was about the characters involved in the Peruvian election process. The idea was the frog Domiltila always told the truth, which is not common inside the government. The performance was very popular with people, it was performed in schools and for people of lots of different ages. It was then banned by the government after the wife of a party member thought it was mocking their party.

This was an amazing moment for them. To see the government be threatened by the power of the arts, was a very empowering and motivating moment

The performance then became nationally and internationally famous. They were invited to visit other countries with the performance of the “banned play”. The ban was then lifted after the government realised the popularity. And the success of the group grew from there.

In the early 90s they developed another play about a Peruvian family called Upa la Esperanza!! It was about the fight for land rights, employment, health care and education. It was funny and  sad, and it became incredibly popular across Peru. They were then invited to tour this show in Sweeden and they returned to Peru with the money they needed to purchase the space they now use as a Circus School.  This was in 1993 when Peru was in a deep economic crisis and they were receiving threats from the “Shining Path” a communist military group in Peru. They were working in periphery communities in Lima where they were seen as a threat by some people.

In a way this was the best time to get set-up. They got the space affordably because the people who ran the building previously wanted to use the space to promote culture and the arts. They were able to set themselves up with very little.

Their work was always based very firmly in pedology, social issues, and inclusion. They wanted to create a space were they could invite people to be part of workshops and courses that would support disadvantaged people. They work with children with emotional difficulties or children from challenging backgrounds. They are either referred to them from other charitable services, or families approach them directly.

In the early 2000’s they bought a big top and developed the professional practice side of the business, using these performances over 4 months a year to fund the business.

We are building a family here. The children who trained with us are now working with us, or in the shows, teaching other children from their communities to grow their confidence.

They work with over 800 children and young people a year, and many of them stay involved with them. They receive no government funding or support. They are an entirely self-sustaining enterprise with social impact at the heart of their business model.

With our performances we really prioritise the quality of the experience for people. We believe that Peruvians should demand better, that they deserve really good treatment and experiences.

It was an amazing experence with the most kind and generous people.