I was fortunate to grab a quick meeting with Eder who gave me some more information and some literature on the CoLab, an innovation lab with a relationship to the Facultad de Ciencias Económicas y Administrativas at La Pontificia Universidad Católica de Chile. The CoLab was mentioned many times in different conversations I was having, they were the first example of this type of model in Chile.

The CoLab was established to create an open and experimental space to create work that tackles the social, environmental and economic challenges within Chile. Their work supports emerging change makers, it supports the development of projects, and they help create new collaborations between different disciplines.

It was founded by the people behind Techo, one of Latin America’s most sustainable social enterprises. They are currently working with SIX Social Innovation Exchange, to establish a stronger network for social innovation in Latin America.

Eder spoke about some of the projects they have supported:

:: Laboratoria ::
A social enterprise that believes in the power of code.

In Spanish there is inherent gender bias in certain words. Words that end in ‘o’ are masculine words, and ‘a’ are feminine. Innovation lab in Spanish is ‘Laboratorio de innovación’, it is given masculine status. There is research to suggest that countries using languages with gender specific nouns and pro-nouns have a stronger gender biases in their cultural behaviours. The Laboratoria therefore was an effort to bring more women into technological innovation. They teach women to code, opening up skilled and well paid job opportunities for them in the tech industry. Women who might otherwise not have the same access to equal education and employment opportunities as men.

Here is the CoFounder Mariana Costa Checa talking about their work.

Atrapanieblas (fog-catchers) is the common name for constructions used to collect water from fog in the Atacama desert in Chile, one of the driest places on earth where the average rainfall is less 0.1mm per year.

Droplets of water settle on a net and then run along gutters into containers. The water obtained in this way is drinkable and is also used in gardening. The method was developed and patented in the 1960s by Carlos Espinosa Arancibia, an engineer at the Universidad Católica in Antofagasta.

He then assigned his patent to UNESCO so that it could be copied free of charge. Now atrapanieblas are being tested in over a dozen desert regions around the world, including Israel and Tanzania.

“We have to improve the technology, because the efficiency of the design is 20% and we are losing 80% of the potential”, says the professor of Engineering of the Universidad Católica, Juan de Dios Rivera, who along with the researcher of Geography Pilar Cereceda, are working to create the first technological mesh in the world. 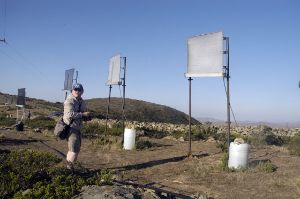 Over the past few years, researchers and students at Universidad Católica have been developing more efficient designs to maximise the potential of this idea. With the support of CoLab. The focus of this project is to strengthen the involvement of communities in the process, so that the use of applied technologies becomes a viable alternative method. Since 2015 they are working with four communities located in three provinces of the Coquimbo region: Los Tomes, Lorenzo de Punillas, Peral Ojos de Agua and Majada Blanca.

Over exploitation of natural resources is a pressing social issue in Chile. The fishing industry is one of CoLab’s main focus areas. Years of indiscriminate exploitation of the marine resources in Chile have led to the extinction of several marine species.

The Laboratory of Social Innovation CoLab UC set up Protejamos lo Nuestro (Protect our own) project, together with the Centre for Marine Conservation and supported by Corfo. Protejamos lo Nuestro seeks to develop a methodological framework for the implementation of a sustainable artisanal fisheries supply agreement in Chile, which works across all parts of the supply chain.

As part of this project they have also set up fishhackaton that brings innovators and designers into the finding solutions.

Social Innovation training programme for students across disciplines and universities

The main objective of this programme is to strengthen the quality and scope of social entrepreneurship in Chile.

So far the school has:

We are always looking at how to evaluate our work, and learn, we don’t just get excited