Luis works at the Universidad Adolfo Ibañez in the DesignLAB. He is the Director of the Centre of Intelligent Territory. A Research Centre that uses mapping techniques to better understand the complex and interrelated functions of the city.  The research areas include socio-spatial, economic, urban planning policies, geo-demography and physical and cultural phenomena focused on the dynamics of people living and working in an urban environment. The Center has a territorial data base of 22 Chilean cities. One tool Mientorno.com is the first regional platform of geographical information presented in a unified, clear and comprehensible way. Inviting the user to explore more about the demographic, social and economic information in a zone or neighbourhood that they define. 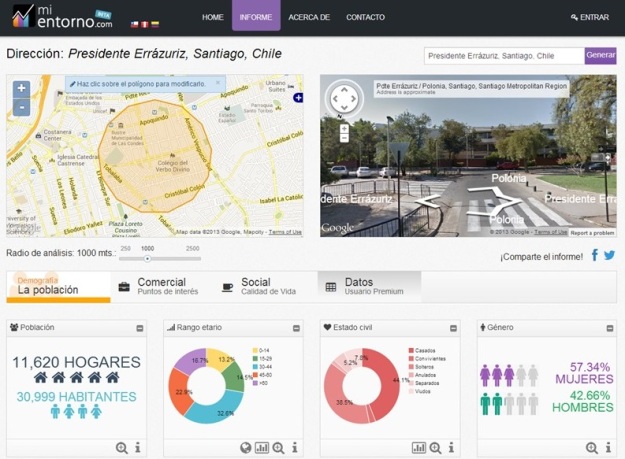 In 2004 Luis worked on this book: Bringing the Harvard Yards to the River

The book contains maps that capture the multiple spaces and buildings, domains and landscapes, university spaces and city spaces, around the Harvard Campus. The book shows the physical reality of the Campus in relation to the city and  allows for a better understanding of its everyday spaces, their purposeful or underused functions. Giving the Campus a context outside of itself. The creation of this book inspired Luis´s ideas about intelligent territories and how territorial information could be mapped to give us a deeper understanding of the spaces and places we occupy.

In 2010 Luis was invited to create an exhibition in Santiago de Chile, asking questions to the city and showing the answers. There were eight maps in the exhibition. For example:

He formed the Centre of Intelligent Territory to apply all the research to real solutions. Pushing the university to address what is really happening outside its walls. There are 20 people that work in the centre, geographers, architects, mathematicians. They are continuously modelling for several cities across Chile.

Territory is a new tool for design… how we properly understand the deep inequalities and segration within our cities… and design diffently with this evidence… I am interested in architecture being more democratised, and at a larger scale